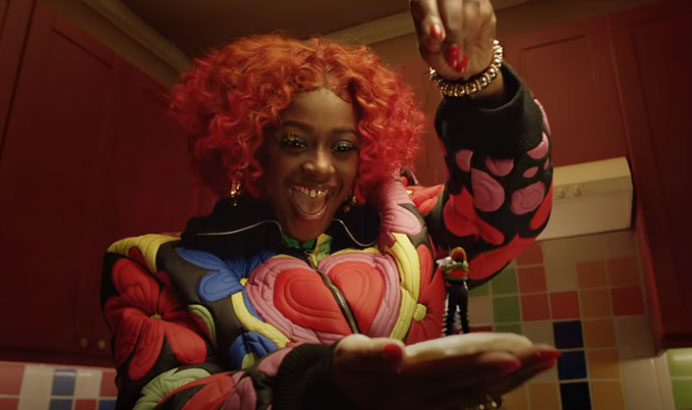 Apple’s “The Magic of Mini” 2020 holiday commercial strays from Apple’s typical annual holiday commercial. This year’s ad features Tierra Whack and focuses on embracing your uniqueness. The commercial starts with the woman rapper and songwriter appearing melancholy during the holidays, and she pops in her Apple AirPods as she walks alone through the streets. Once she gets into her apartment, she says “hey Siri, turn it up” to her voice-controlled Apple speaker. Once the music is turned up, a mini and energizing version of herself appears in the apartment. This mini version of herself is giving her advice to cheer up and let loose. The commercial then transitions to Tierra now dancing in her apartment with her sidekick on her shoulder. Her clothes have changed from a bland outfit to a unique patterned jacket with dramatic makeup, jewelry, and a fiery red wig. The lyric “I don’t want to be judged, I just want to be me” is repeated as the commercial features the Apple HomePod Mini with AirPods next to it on the table.

This Apple commercial uses Tierra’s unique music and style to show off the HomePod’s and AirPod’s ability to elevate the music experience and inspire music. They show that using a HomePod correlates with elevating your mood and embracing your unique style. The connection Apple tries to make is that a HomePod gives you creativity and the opportunity to embrace what makes you stand out. Similarly, by using a mini version of Tierra in the commercial, Apple tries to insinuate that the HomePod is a reflection of your unique self, and you can achieve confidence and self-love from using this speaker.

This commercial stands out to me because it is unlike Apple’s typical holiday commercial. In the past, Apple’s commercials usually play on emotions of nostalgia, community, and coming together, whereas this commercial focuses on embracing your own self and unique qualities. I think this commercial is different in 2020 because Tierra reflects a lot of our feelings of melancholy, loneliness and being insecure this year. So Apple is playing off those current feelings that many of us share and implying that a HomePod can cheer you up despite those feelings. If they did release a more traditional holiday commercial, filled with gatherings and communities coming together, they may have given off the wrong impression about safety measures or made people more blue about that the atypical holidays and festivities this year. Apple’s 2020 commercial aims to be relatable to the consumer this year, so just doing that creates a sense of community and togetherness.

The overall marketing elements used in this commercial are not as subtle as past holiday commercials. As many other companies have had to do, Apple pivoted its approach this year in order to reflect the values of the year. Usually the viewer rarely knows that it’s an Apple commercial until the Apple logo is shown at the end of the commercial. This advertisement, however, clearly shows off Apple products from start to finish. This change in style is interesting because typically consumers respond well to commercials that have a good message without shoving the product in the audience’s face. This commercial also took the route of using a celebrity to endorse the products over the usual Apple holiday commercials that feature more “average Joe” consumers. This approach is effective because it is showing Tierra, a well-known figure, as relatable and also struggling to feel happy during the holidays this year. With the audience seeing that they are not alone, people view Apple as a brand that unites people based on their similar feelings. Overall, Apple changed up their strategy quite a bit to reflect the changes in this unique year, and it is beneficial to the brand because it shows that they are current and sympathize with their consumers.

Ultimately, Apple’s 2020 holiday commercial reflects 2020 in the way that it is much different from past years. Instead of themes of community, gathering, and holiday joy, this commercial features the reality of 2020 holiday blues, spending time alone, and the need for a mood boost once in a while. Though this year is different, Apple is showing us that we can still make the most out of this holiday season. This commercial is one of many marketing strategies that have had to pivot this year, and though Apple is a big-name brand, even small businesses and restaurants have to consider a new marketing strategy. Stay tuned for our January blog on Immunizing Your Restaurant With a New Online Marketing Strategy.